Carmarthenshire would become a mass of construction sites if the housing targets in the newly agreed Local Development Plan are to be met. The plan, which although only just finalised covers the years 2006 to 2021, allows for 13,895 new homes in the county between 2012 and 2021.

In the first six years of the plan, 2006 to 2012, only 1,883 new homes were built in the county, according to figures in Appendix 1 of the plan (link below). There is little demand from developers to build large estates:

Not that the Local Development Plan envisages many thousands of ‘affordable’ homes. The maximum would be 2,133 of the 11,359 proposed, over the life of the plan, for the main growth areas of Carmarthen, Llanelli and Ammanford/ Cross Hands, the service centres of Burry Port/ Pembrey, Llandeilo, Llandovery, Newcastle Emlyn, St Clears and Whitland, and 11 local service centres.

The chart shows the numbers of homes which could be built in Carmarthenshire’s larger communities, and the maximum proportion of ‘affordable’ homes in each location 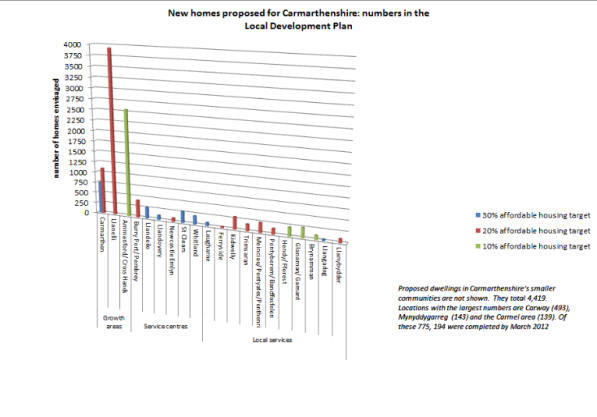 Source: Appendix A of the Carmarthenshire LDP inspector’s report

The definition of ‘affordable’ is woolly in any case. Rents are supposed to be no more than 80% of local market rents, and occupants have to qualify by virtue of incomes which are too low for local open-market housing. ‘Affordable’ seems to mean ‘provided with an element of public subsidy’. Not many affordable homes are planned for low-income Carmarthenshire, though.

Despite the capacity in the plan for 13,895 additional homes between 2012 and 2021, they are most unlikely all to be needed. The original estimates were based on population growth in the early 2000s, before the financial crash. In the most recent year for which we have figures, June 30th 2012 to June 30th 2013, the population of the whole of Wales rose only 8,345, and in Carmarthenshire the net increase was just 364. The existing population fell by 302 as births failed to keep pace with deaths. Incomers totalled a net 339 from other parts of the United Kingdom and 335 from other countries. The average household in the county contained 2.185 persons (statistically speaking) in 2011, so the extra 364 Carmarthenshire residents would have needed only 167 homes.

This demand is less than one-ninth of the 1,544 allowed in the plan for every single year between 2012 and 2021, and if it remains as low, should not result in the swamping of Welsh-speaking communities — provided that the Welsh-speakers of working age can find jobs, so they are not forced to migrate in search of employment.

Developers like clean flat land on which to construct three- and four-bedroomed houses for the government’s favourite demographic group, those ‘hard-working families’ with secure jobs and mortgages they can afford to repay. This is not the demand in Carmarthenshire, where ageing pensioners look for small bungalows and warden-assisted developments within their own communities. Bungalows are generally less profitable for developers than cram-them-in housing estates, and so they don’t get built.

Neither, at present, do the estates of ‘executive’ homes.

The village I live in, and others round about, have empty homes aplenty, several of them deteriorating rapidly. Given the low rate of population growth in the county, wouldn’t it be sensible to bring these empty dwellings back into use, using local firms to do the work, and thereby encourage people to move into established communities which are suffering from out-flight?

2 thoughts on “Carmarthenshire Plans for Thousands of Unwanted Homes”

This site uses Akismet to reduce spam. Learn how your comment data is processed.