News: Open Week is Chance to See One Planet Development in Action

In the week starting Monday July 22nd 2019, to Sunday July 28th, a selection of One Planet Developments in Wales will open up to visitors.

In 2018 a similar Open Week familiarised members of the public with One Planet Development, a policy of the Welsh Government.  Although a decade old, the policy still draws criticism from some as a back-door way of building a new home in the countryside.

One Planet Developments (OPDs) are smallholdings from which the occupants have to draw at least 65% of their basic household needs. The policy, explained in One Wales: One Planet – the sustainable development scheme of the Welsh Government, published in 2009, superseded the earlier and even more stringent Policy 52 of Pembrokeshire County Council and the Pembrokeshire Coast National Park.  The nine smallholdings in the televised Lammas eco village at Tir y Gafel, Glandŵr, Pembrokeshire, were given permission under Policy 52.

By late May 2019, Wales had more than 40 smallholdings given planning permission under either Policy 52 or One Planet Development.  The majority are in Pembrokeshire, with rising numbers in Ceredigion and Carmarthenshire and a scattering elsewhere in Wales. 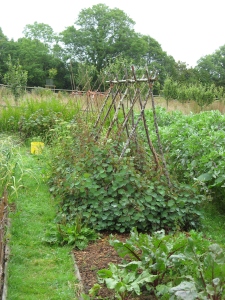 One Planet Developments like this one in Pembrokeshire benefit biodiversity and generally improve the soil, so that fertility increases year on year.

Pembrokeshire’s Cllr Huw George called in April[i] for a halt to new One Planet permissions, so that Welsh Government can properly monitor and assess whether the smallholdings are being managed fully in accordance with the requirements of the policy. He felt it unfair that applicants could receive permission for eco homes but farmers could not build homes for their children.

This view is not uncommon. The policy was introduced not to spite farmers but to assist Wales’ transition to a One Planet world. The Welsh Government decided that current levels of resource use and the consequent environmental damage are unsustainable given that there is only one Earth and not multiple others. One Planet Developments are off-grid, produce their own energy and much of their own food, and organise their own water supply and drainage. Vehicle use is restricted. Buildings are constructed of local renewable materials. Running a One Planet venture is hard work, the outputs and inputs have to be carefully recorded and sent off to the local planning authority for annual monitoring.

Monitoring, the concern raised by Cllr George, is difficult for local authorities which have been forced by funding shortfalls to cut services every year since 2010. The Institute for Fiscal Studies warned in September 2016 that departmental expenditure limits in Wales in 2019-20 would be 11.6% lower than in 2010-11. The monitoring of One Planet Developments is a task that did not exist in 2010, and as the number of permissions rises, will become more onerous. Between 2010 and 2020 councils in England and Wales will have lost almost 60p in every £1 previously received from the Westminster government, leaving them increasingly reliant on council tax, business rates, and grants from anywhere and everywhere, as well as monies that councils raise themselves from rents, charges, interest and dividends. So Cllr George has a point – when planning departments have less money, how can they monitor growing numbers of OPDs?

This is just one of the difficulties associated with the policy. In theory, if occupants fail to produce 65% of their basic needs from the land, or otherwise contravene the conditions of their permission, that permission can be withdrawn and they would have to leave. This is a harsh outcome if the failures are due to factors beyond their control, such as terrible weather, flood or drought, illness or accident, or advancing old age, and indicates that the policy still needs several tweaks.

Two more OPDs received permission from Pembrokeshire County Council on May 21st. Both are in the area of Mynachlog-ddu Community Council, which objected to both.  Hywel Vaughan, chair of the community council, was critical of the planning officer’s recommendation to approve the ventures, and he wrote about the second: “Although it is difficult to oppose the application because several specialists representing different organisations support the application, residents of the community are worried about the adverse damage this development will have on the area’s beauty.”

Cllr David Howlett said “the policy is being used to plonk properties in rural areas”, and Cllr Michael Williams called the policy “fundamentally flawed”.  Despite these reservations, one application was approved unanimously and the other by a majority of eight to one.

The first application approved, 18/0934/PA, is on 2.7 hectares (almost 7 acres) at Parc y Dderwen, formerly part of Pencraig Farm, Llangolman, for Lauren Simpson’s and Phil Moore’s fermented foods enterprise. Launched in 2018, the business already supplies 16 shops with foods including sauerkrauts, pickles and kimchi. Michael Ritchie of Bryngolman Farm, Llangolman, representing “a number of objectors”, said the business was already established, so there was no need to live on the land. The proposed site for the house was on top of a ridge, he said, and other buildings were too large and strung out over the site with “all the visual appeal of an urban allotment”. “It’s an elaborate attempt to get a smallholding on the cheap,” he said. But the objection did not succeed.

Parc y Dderwen will include an orchard, market garden, polytunnel, workshop and cold store, with bees, poultry, new woodland, hedgerows and ponds contributing to biodiversity. The house would be a design by Mark Waghorn[ii] of Llandeilo, who specialises in One Planet, ultra-low-impact structures.

Lauren Simpson and Phil Moore have both worked for the Ecological Land Co-operative[iii]. This co-op provides land for smallholdings in England, where demand is high but there is no similar policy to One Planet Development.

The second application approved, 18/1126/PA, by Rory Horton and Etta Happe, was for Baradwys, formerly known as Rhosfach, a larger area of 9 hectares (22 acres) near Llangolman. The original idea for a herd of alpacas was broadened to include Angora rabbits when part of the land was revealed as a habitat for the rare Marsh Fritillary butterfly. This habitat will be managed in co-operation with Natural Resources Wales and cannot be fully utilised for alpacas. Angora rabbits need less space than alpacas and also provide quality fibres for natural textiles.

The land will accommodate two polytunnels, a caravan until a permanent home is built, a barn, studio, and agricultural buildings including one for the rabbits and two field shelters for alpacas.

These two enterprises are in their very early stages, but for people keen to visit established OPDs, the Open Week will be a good opportunity. More information about the Open Week, organised through the One Planet Council, will be available before July 22nd.

This site uses Akismet to reduce spam. Learn how your comment data is processed.